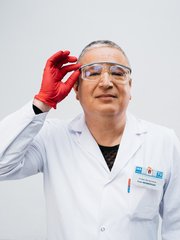 PW has carried out his diploma and PhD thesis in the group of Prof. Wolfgang Linert and received his PhD in 1998 from Vienna University of Technology (VUT). During his diploma studies he was on a study visit at the Institute for Isotopic Research, Department for Spectroscopy, Hungarian Academy of Sciences, Budapest (Hungary), Prof. Dr. Janos Mink and at the Institute for Chemistry, Dundee University, Dundee (Scotland, UK), Prof. Dr. Trevor J. Dines.

Since 1998 PW was research assistant at the Institute for Inorganic Chemistry, TU Wien, and since 2002 university assistant at the Institute for Applied Synthetic Chemistry, TU Wien (Austria). As part of his didactic training PW participated at the European Chemistry Thematic Network ECTN “Second Summer School” for Newly Appointed University Chemistry Teaching Staff” in Malta in 2007. 2010 habilitation (venia docendi) in Inorganic Chemistry.

Member of scientific committees and societies:

Since 1996 Observer and since 2000 Member of the Planning Committee of the “International Conference of Coordination Chemistry” (ICCC).

Since 2006 Member of the Planning Committee of the annual “Workshop on Superconductivity and Novel Materials” organised by Prof. Karlheinz Schwarz on Planneralm, Styria (Austria), which is organized by Prof. Günther Rupprechter since 2018 in Schladming (Styria).

July 2007 Member of the local organising committee of the FIGIPAS-9 conference in Inorganic Chemistry, organised by Prof. Karl Kirchner at Vienna University of Technology (Austria).

2010 - 2012 Member of the Board of the “Chemisch-Physikalische Gesellschaft”, Vienna, Austria.

PW research interests are located in the field of molecular magnetic compounds based on Fe(II) spin crossover (SCO) systems as well as lanthanide and actinide coordination chemistry. His group focuses on:

PW research interests are also located in the field of thermochemical energy storage materials (TCM) based on salt hydrates and ammoniates, reversible oxide-hydroxide and oxide-carbonate reactions as well as on redox-active metal oxides. His group focuses on:

Despite of publication and dissemination of results several patents have been granted.

Our website uses cookies to ensure you get the best experience on our website, for analytical purposes, to provide social media features, and for targeted advertising. This it is necessary in order to pass information on to respective service providers. If you would like additional information about cookies on this website, please see our Data Protection Declaration.